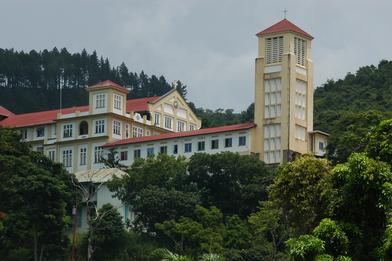 Mount St. Benedict is the home of the Benedictine monks who live and work in Trinidad and Tobago. They follow a way of life that traces its roots to St. Benedict of Norcia who was born in Italy in the year 480. Educated in Rome, Benedict was exposed to the onslaught of hedonism that was rampant at the time, as people became disoriented from their principal purpose in life. Benedict sought out the solitude of a cave at Subiaco, some thirty miles east of Rome, to recapture what he perceived to be the primary purpose of life: the search for God. Within a few years many young people sought out Benedict, one of his early disciples being his sister, Scholastica.

His first project was to instruct them in the way of prayer and love, and for this, he set up small communities using the Gospel as his guide. In the year 529, Benedict established a monastery at Monte Cassino, where he lived with his community until his death in 547. It was while he was Abbot of Monte Cassino that he wrote a Rule for monks, which has come down to us today, and which together with the Bible is the primary source of spirituality for Benedictine monks.

Today, there are approximately 9,000 men and 18,000 women who follow this way of life, scattered throughout the entire world. In the Caribbean, they can be found in Martinique, St Lucia, Haiti, Puerto Rico and Trinidad. Mount St. Benedict is the oldest monastery in the region, having been founded in 1912. Benedictines are those who have been called to live in community and strive to conform their lives to the teaching of the Bible and the Rule of St. Benedict and also to the guidance of an Abbot or Abbess, the spiritual leader of the community.

In his chapter on the procedure for receiving new members, the only qualification that Benedict stipulates in his Rule is that the person is a seeker, genuinely searching for God. It is this radical one-pointedness, this centeredness on Christ which is the starting point. Whatever is done must flow from this. Benedictines have no specific apostolate. They were not “founded” nor do they exist for the sake of education, or the pursuit of learning, or to promote agriculture, etc. The specific Benedictine idea is community life according to the Gospel as lived by the early Christian community (Acts 2:42-47; 4:32-35), and to be open to the needs of the place or diocese in which they are located.

As a Benedictine community, Mount St. Benedict has made a commitment to root itself in the land it inhabits. Our work over the past ninety-two years has flowed out of this basic commitment as we seek to respond to needs as they arise. At present, we are involved in Pastoral Counselling, Pastoral Outreach, Yogurt Production, Retreats, Woodwork, and Technical Education. Central to our life is a continual round of prayer and praise, as we seek to live an integrated life of prayer, work and study. Five times each day the monks meet to offer prayer and praise to their Creator.

How can one become a monk? This process begins by contacting the monastery’s vocation director. He will meet with the candidate a few times, after which he may invite him to visit the monastery to observe the life for a period of time. This generally begins with a weekend visit. The monastery looks for good physical, emotional, and spiritual health in a candidate, and completed secondary education as a minimum. After a period of time of community and candidate getting to know each other, the candidate may feel inclined to join the monastery. If the Formation Team accepts him, he begins a period of postulancy, which may vary in length from one candidate to another. At the end of this period, and if the candidate is acceptable, he begins his novitiate, which lasts for a two-year period. During this time, the novice is initiated in the monastic way, by a process of education, testing and discernment. On completion of his novitiate, the novice may profess vows. This is for a period of three years, during which time the individual continues the growth begun in the novitiate. For some, studies for the priesthood or other area of training are begun at this time. After three years, vows are professed for life. From the time of one’s first joining of the monastery, there is a period of at least five years before a final commitment is taken.

Mount St. Benedict is a community of monks living, praying, and working together. For those who live there, it is home. Here we learn to love God and one another. If you are interested in learning more about the Benedictine way of life, please contact the Vocation Director. Whoever you are, we welcome you!

The Abbey of Our Lady of Exile
Mount St. Benedict