election.  Eventually the election for the first abbot took place in Mount St Benedict 02 and 03 June 1947.  Abbot Theodore Neve of St Andre, Belgium presided over the election.  On 03 June 1947, Dom Adelbert van Duin, a monk of Mount St Benedict, was elected the First Abbot of Mount St Benedict, a position he held for the next twenty-five years​ until 1972.  He received the solemn abbatial blessing from the hands of Archbishop Finbar Ryan of Port of Spain on 16 June 1947.  Exactly during the election process, the first batch of cement was heard being pored into the ground to lay the foundation for the new abbey church.

Both Fr Augustine and Fr Cuthbert, two young Dutch men in their early 20s, arrived on the shores of Trinidad and Tobago on 19 February 1947, at the same time that the official ducument arrived granting Mount St Benedict abbatial status in the fourteen hundreth  anniversary of the death of our holy Father Saint Benedict (+547).  And it was in the uncompleted abbey church that these two young men were received as Benedictine monks on 16 May 1948 in the hands of the Right Rev Abbot Adelbert van Duin.

THE SECOND TIME AROUND ...

​​Tuesday 17 May 2016 at Mount St Benedict was one of joy and celebration as Brother Richard Diaz professed his monastic vows during the 6:45 a.m. Mass.  His sister, Rosemarie, accompanied by a sister-in-law and a cousin, sat in the front row of the abbey church and were visibly moved during the ceremony.  Several friends and well-wishers were present as well as Fr Kenny Spence, who journeyed all the way from La Romaine, to join the monks for the occasion.  However, what turned out to be a wonderful surprise was the presence of some of Richard’s friends from Tobago, who had arrived as early as 3:00 am that same day on the early morning flight.  Brother Richard had spent over twenty (20) years in Tobago as a Lay Minister, conducting Eucharistic Services and assisting the resident priest.  His ministry there and especially his homilies were very much appreciated by the people of Tobago and they wanted to be present for this special occasion in the life of Richard.

This was not the first time that Brother Richard was making vows as a Benedictine monk and at Mount St Benedict.  He had already done so in 1966 together with four other young men.  The only surviving brother from that batch is Brother Marius Williams, who served as the official photographer during the ceremony.

The music was tastefully rendered and the songs hand-picked by Brother Paschal Jordan, Prior and Music Director of the abbey.  A small group of singers and musicians added to the festivity of the occasion.

Since leaving the abbey during his triennial profession in 1968, Brother Richard has been longing for the monastic life.  His profession this time around was a dream fulfilled.

During his homily, Abbot John compared God to a woman who seduces a man whom she loves.  The journey of Bro Richard back to the monastery is as a result of God’s seduction and is summed up in the words from the prophet Jeremiah which were quoted on the back cover of the programme: “You have seduced me, Lord, and I have let myself be seduced” (Jeremiah 20:7).

At the end of the service, some close friends and family members were invited to join the monks for a very tasty and satisfying breakfast.  May God continue to bless Richard on his monastic journey…​​​

The monks of the Abbey, Mount St. Benedict, will be on Retreat from the evening of Monday 04 July to the evening of Friday 08 July 2016. They will not be available to attend to visitors during this time. The Community Eucharist will be at 5:30 p.m. on Tuesday 05, Wednesday 06 and Thursday 07 and at 5:00 p.m. on Friday 08 July 2016. The Retreat Director is Dom Mark Sheridan, O.S.B., Dormition Abbey, Jerusalem.

The Feast of St. Benedict will be celebrated on Sunday 10 July 2016 with the solemn celebration of the Eucharist at 8:30 a.m. and Vespers and Benediction at 3:00 p.m. All are invited.

Roman Catholic priests of the Archdiocese of Port of Spain gather at the Seminary of St John Vianney and the Ugandan Martyrs to reflect on the Church in Trinidad and Tobago.

Fr Augustine (Peter) Schreurs and Fr Cuthbert (Jan) van de Sande will be celebrating their sixty-eighth  anniversary of monastic profession on Monday 16 May 2016.  Together with Fr Jerome Koot (now deceased), they were the first monks to be professed in the present abbey church (incomplete at that time).  They were also the first monks to pronounce their vows before the newly elected abbot of Mount St Benedict, Abbot Adelbert van Duin.

As the monks prepare for another severe "dry season" in 2017, a water harvesting improvement project was embarked upon to forestall any adverse effects from such. This project should be completed by Saturday 05 November 2016. On completion, the monastery, the pilgrims and the adjoining institutions would be better prepared for the expected severe weather conditions in 2017.Type your paragraph here. 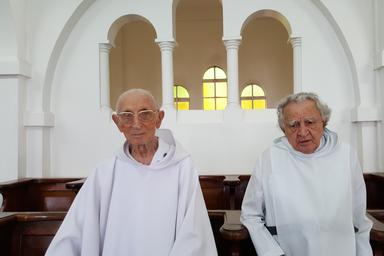 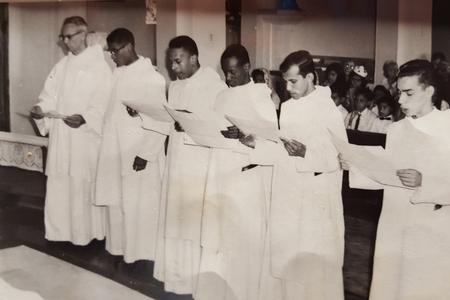 News from the Mount 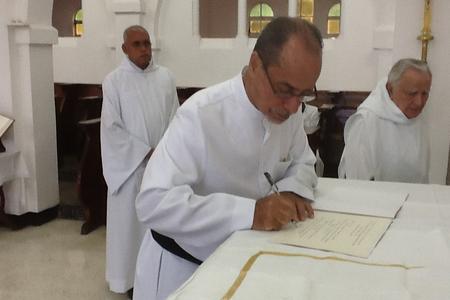 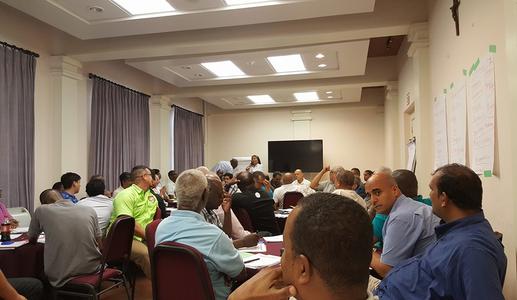 Brother Richard is on the extreme right as he made his vows in 1966 together with four other young men.

The following statement was prepared by the priests who attended the workshop at the Seminary 29 to 31 May 2016. It speaks of the gratitude they all had for the prayerful support given by the faithful over the period.

In response to the invitation of Archbishop Harris, sixty-five priests of the Archdiocese spent from Sunday 29th to Tuesday 31st May, 2016 at the Seminary of St. John Vianney and the Ugandan Martyrs reflecting on our Church. We discussed several possible ways of serving one another and the People of God in a spirit of openness and respect. We searched the Scriptures and looked at our Church as a COMMUNION and as a FISHING NET calling us to a renewed commitment to work in collaboration with all the Baptised, to plan and undertake relevant programmes of training and formation to bring all our giftedness and creativity into the service of the Kingdom of God in Trinidad and Tobago.

We recognize that this sets us on a journey of faith and hope which will require your input, our patient efforts and confident prayer. We are most grateful for your support in prayer during the days of preparation and during the meeting itself. The Spirit of Jesus was most certainly with us. We look forward to your continued interest and support, and we will continue to communicate with you via the Catholic News.

As for the immediate concern with arranging for priests to serve the Parishes of the Archdiocese, His Grace has assured us that he will be meeting with the Personnel Board in the near future to deal with this.

Pope Francis met with the benedictine abbots and abbesses in Sala Clementina in the Vatican on Thursday 08 September 2016.  The following link gives a report of their visit:

​​Every four (4) years, the World Congress of Benedictine Abbots is held at Sant’ Anselmo in Rome.  This year the Congress took place in September at which there were 300 participants.  Among the participants were representatives from several Eastern Orthodox and other Christian denominations who all addressed the assembly and participated in several aspects of the Congress, bringing with them the richness of the wider Christian world.  The Benedictine Abbesses and Prioresses, representing 14,000 Benedictine Nuns and Sisters scattered throughout every corner of the globe, were also represented by delegates from each continent.

The theme was “Monastic Life Today - Communion Enlightened by the Word of God”.  This theme was graphically depicted by the prominent display of the Book of the Gospels in the middle of the meeting place throughout.  During the Congress, Abbot Gregory Polan, OSB, Conception Abbey, Missouri, USA, was elected as Abbot Primate to be the spiritual and moral leader of the Benedictines for the next eight years.  Immediately after his election, Abbot Primate Gregory with one hand on the Book of the Gospels recited the creed, in which he promised fidelity to the Benedictine Order and to the Roman Catholic Church. Being surrounded by all the participants and with his hand on the Book of the Gospels was for him a moment of deep emotion and of grace and a beautiful symbol of prayer and faith.

As he addressed the Congress, Abbot Primate Gregory Polan paid glowing tribute to his immediate predecessor, Abbot Notker Wolf, who had served the Benedictine Order as Abbot Primate for the previous sixteen years in a most fitting and noble manner.  Abbot Primate Gregory Polan offered a message of faith and hope to the assembly. Especially to the young, he encouraged us to be messengers for God:  God’s voice inviting others to follow Jesus in the Benedictine and monastic way of life, a way of life that calls for generosity and service, prayer and reflection, the inspiration of which comes to us from the Word of God.

He emphasised the importance of the Word of God and especially the Psalms in our lives as Benedictines.  He exhorted us to be transformed by the Word of God and to become living words of the Gospel for all to see.  For him, monasteries are among the most important places in our world today.  There are so many people whose lives are significantly touched by brokenness, sadness, failure, disappointment, struggle and loss who come to us.  We say to them, “come and find hope in the word of God.”  We can offer them the words of the psalms in which are reflected their very life stories. But the psalms also tell us of the joy and gladness that comes in knowing the Lord. When we can tell the mystery, our faith inspires others.

One of the highlights of the Congress was a visit to Pope Francis at the Vatican.  Many of the participants were deeply touched by his great witness of love and mercy to us Benedictines.  This occurred on Thursday 08 September, the Feast of the Birthday of the Blessed Virgin Mary.  For me, it was an awesome and profound experience.  He greeted each participant personally and several were actually lost for words.  In his address, he described Monasteries as “oases of God’s mercy” and he thanked the Benedictines for living as “people of mercy” by their silent yet eloquent witness.

The Congress was a moment of deep solidarity for the entire Benedictine Order and a time of true prayer and reflection for all. Let us all pray that the Benedictine tree may continue to spread its many branches far and wide and be “like a tree that is planted beside the flowing waters, that yields its fruit in due season and whose leaves shall never fade” (Psalm 1).