As more people become increasingly health conscious, there is a growing demand for food products that enhance the life expectancy of individuals. Health and holiness have often been associated together, and in the Hebrew world-view an individual was considered blessed by God if he/she lived to a ripe old age.

The spirituality of the monks at Mount St Benedict has never been divorced from attending to the physical needs of individuals. Almost from its beginnings, the monastery had invested time, money and talent in the production of a high-grade honey, used by thousands of pilgrims for both social and medicinal purposes.

In more recent times, at least from 1997, the monastery has been churning out several gallons of another high-grade health product: PAX YOGURT! This fermented, semi fluid milk product, has been used extensively as a health food from time immemorial, being one of the oldest foods know to humankind.

The production manager, Maxime De Comarmond, is very devoted to the manufacture of high-quality yogurt and Fr Cuthbert, now in his 90s, and the brain behind the Mount's Yogurt, has left the secret recipe to him.  A devoted cadre of personnel ensure that the yogurt gets to the people who need it.

For the health-conscious individual, the benefits of yogurt are legion. In research conducted by Dr Grace Gopaulsingh, a friend of the Abbey, a number of its important benefits were identified. It replenishes calcium in the body, assists in the prevention of breast and colon cancer, assists in food digestion, and is useful in combating nausea / upset stomach (e.g. after chemo, in pregnancy).

PAX YOGURT is fat-free and cholesterol free, and thus a good food for the heart. It helps in the control of gastro-enteritis. It is also good for expectant and nursing mothers and is recommended for baby’s first semi-solids (not for lactose intolerant babies).

For those who simply want to look good on the outside, yogurt is ideal for facials as it helps fight pimples. In the smaller containers, it is a healthy bedtime snack and when fresh fruit is added it does have increased nutritional value. Among its several benefits, it is reputed “to prolong life, increase sexual potency, remedy baldness and calm frazzled nerves”. (Katriena Gibbon)

PAX YOGURT is available at several supermarkets throughout the country. If you have not yet seen PAX YOGURT on the shelves of your favorite supermarket, don’t worry; be happy!  It will soon be there! 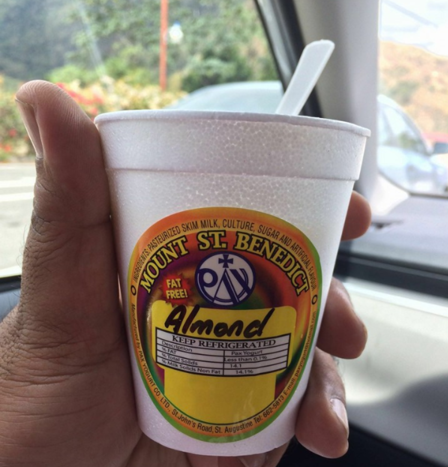 One of our most popular products: Almond-flavoured PAX Yogurt!  Sampled by a customer - why not try one today?

Fr Cuthbert van de Sande, the founder of the Pax Yogurt Company, is seen standing between his sister and his niece on a visit to Mount St Benedict in 2004. 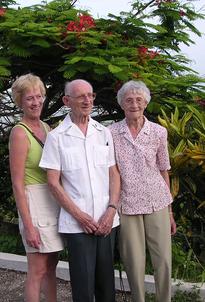 In addition to a dedicated team of management and workers in the factory, Pax Yogurt now has at least two patrons in the heavens.  The founder and inspiration behind the product, Fr. Cuthbert van de Sande, went to enjoy his heavenly reward on 28 August 2017.  A loyal friend and director of the business, Mr. Brendan Garcia, had also gone to his eternal reward on 19 July 2017.

For several months, the Pax Yogurt team has been doing research to improve the brand.  From December 2017 two new sizes of containers were introduced: 10 oz. and 22 oz.  A brand new label has also been designed which has more detailed information about the product.  The traditional flavours have however been maintained: natural, almond, guava, passion fruit, pineapple, soursop, strawberry and vanilla.

High quality live active yogurt cultures, rich in probiotics, with excellent health benefits to the consumer, have been included in the formula. These are as follows: streptococcus thermophilus, lactobacillus bulgaricus, lactobacillus rhamnosus and a selected strain of lactobacillus plantarum. Pax Yogurt is available at the Pax Abbey Shop on the Mount, at all branches of Massy Stores, Xtra Foods, Tru Valu, JTA and more.

PAX YOGURT replenishes calcium in the body, assists in the prevention of breast and colon cancer, assists in food digestion, and is useful in combating nausea / upset stomach (e.g. after chemo, in pregnancy).  PAX YOGURT is within the diabetic sugar level range and cholesterol free and thus a good food for the heart.

The Pax Yogurt members of staff are grateful for the continuing support of the monks of the monastery of Mount St Benedict and the support of the loyal customers.  They are also quite conscious of the presence of Fr. Cuthbert, who appears to be even more active now than when he was alive, seeking at all times the welfare of the health-conscious citizens of our beloved twin-island State of Trinidad and Tobago.